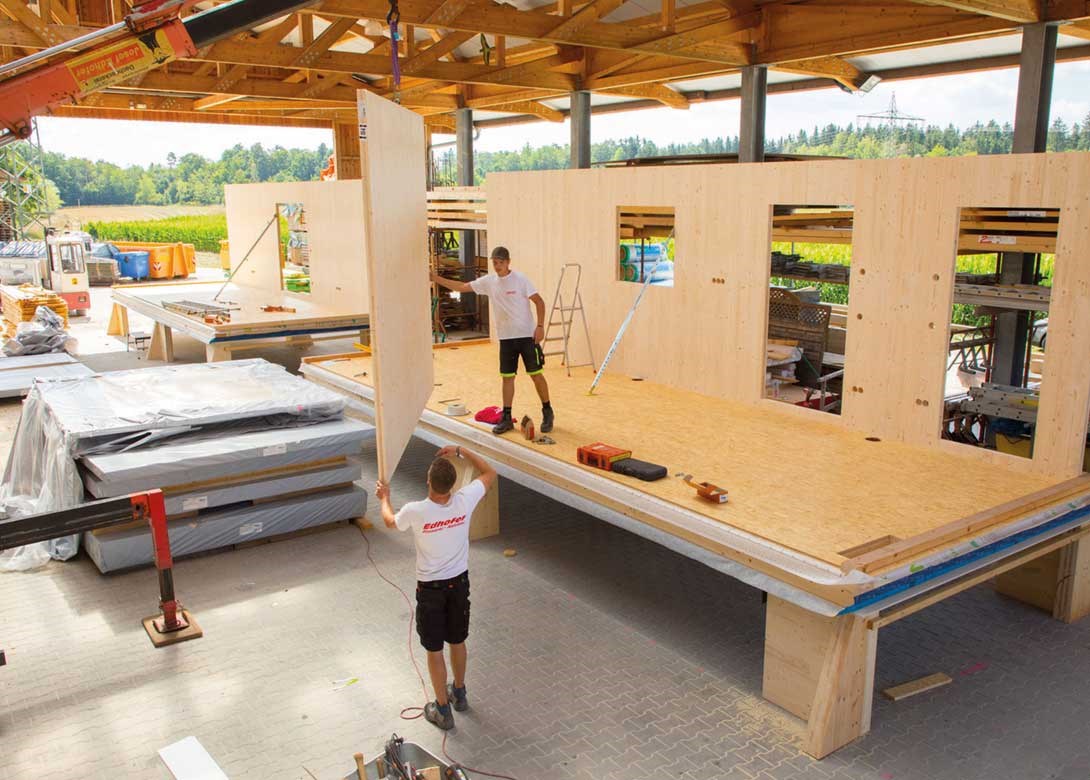 A weekend home made of cross laminated timber was largely prefabricated by the Bavarian carpentry firm Edhofer, with the help of HECO screws.

Many city dwellers dream of a weekend home. A couple from Munich made this dream come true last summer. Gilgenberg am Weilhart, only a few kilometres from the Austrian border, is home to their new 60 square metre weekend and holiday home. As the nature loving owners particularly appreciate the atmosphere typical of alpine huts, they decided to build their little house entirely out of wood.

The homeowner explained: “With a wooden house, we support a sustainable construction method and are therefore going with the times too.”

Prefabricating modules
The construction company Edhofer, based in the Bavarian town of Marktl, recommended building the house in modular construction using cross laminated timber. The building was divided into two modules, each about 10m x 3.5m in length, and several roof elements. The advantage of this construction method is that, depending on requirements, certain work steps are carried out in the company’s own assembly hall, which shortens the construction time on-site. For such a small holiday home, this meant that components such as the insulation and façade were already added in Germany. But Edhofer was not only responsible for the planning and assembly of the shell, but also coordinated the subsequently involved trades – another argument in favour of prefabricating the modules as far as possible. This also facilitated coordination among all project members.

A special feature was that the carpenters had to consider the more stringent energy requirements in Austria when planning the building. Consequently, the ceiling was given an 8cm thicker insulation with a total cross section of 28cm. Thus, the building now has a minimum heating load of 2kW, which corresponds to the capacity of a kettle. The carpenters fixed the substructure for the horizontal façade formwork made of larch wood to the solid wood walls right through the insulation. To do so, they used part threaded screws from HECO-Schrauben GmbH & Co KG. The screw manufacturer’s HCS design software also allowed the carpenters to carry out the timber dimensioning according to Austrian standards with ease. 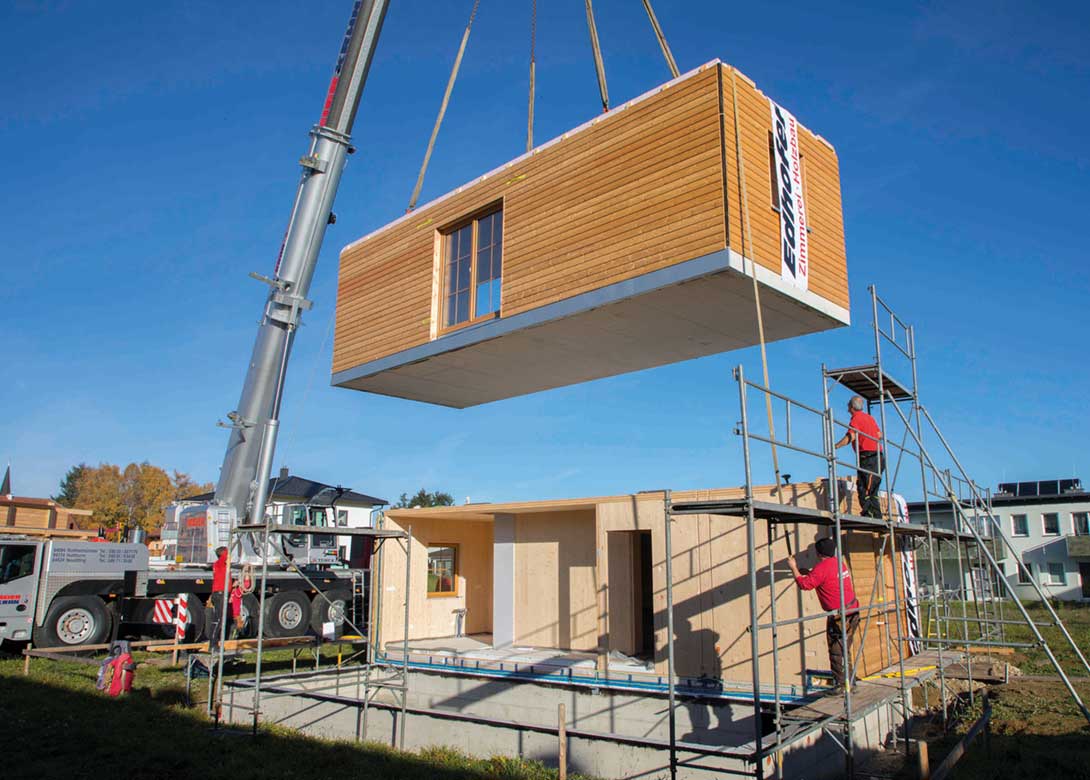 Choice of screws
To attach the individual elements such as walls and ceilings, the installers used the HECO-TOPIX flange head XL screw. Its special feature is the big flange head, which has a diameter of 22.5mm and is therefore particularly suitable for dissipating high loads.

“The modules have to withstand a lot when being lifted onto trucks and during transport,” explains wood construction engineer Andreas Edhofer. “Therefore, the connections between the floor, wall and ceiling elements must be absolutely secure. Especially with corner joints, the XL flange head screw has its advantages, because it ensures greater contact pressure.”

Like all TOPIX screws, the HECO-TOPIX flange head XL screw can be quickly and reliably processed with low screwing torque without any need to predrill the components. Where horizontal forces act and shear forces have to be dissipated – for example, when fastening the interior walls – the carpenters drove the HECO-TOPIX-CC screws in at a 45 degree angle. Here, the load to be removed is dissipated via the full thread of the screw.

After two days, the shell was bolted together. Next, the interior fitting process commenced in the assembly hall. “We made the most of the advantages of prefabrication and had the modules equipped with plumbing and electrical installations, bathroom tiles, windows and doors,” says Andreas Edhofer.

The trouble-free assembly in the hall was followed by the loading of the modules onto the truck and their transport to Austria. The construction on-site showed that the building elements had survived the transport with no issues. The connections held firm even while the components were hanging in the air. All that was left was for the individual modules to be interconnected. Just three weeks later, the couple were able to move into their holiday home. 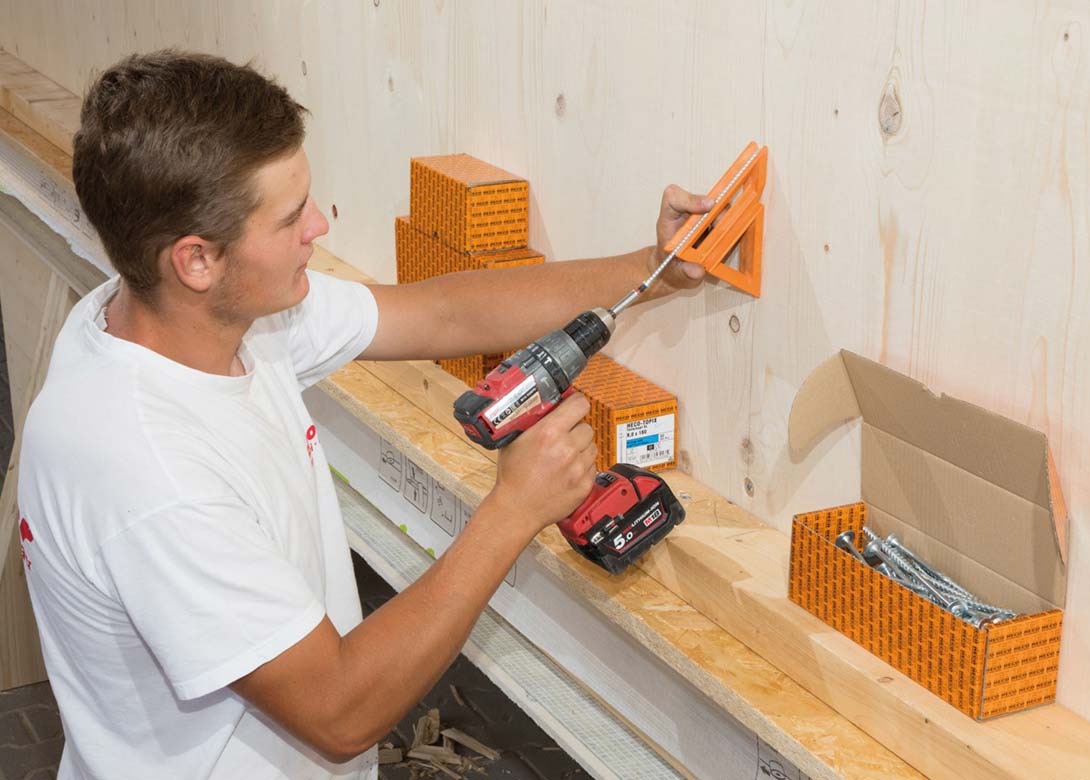 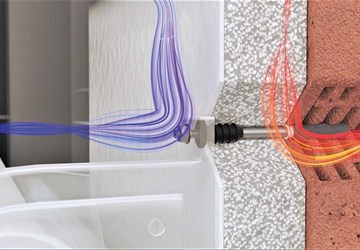 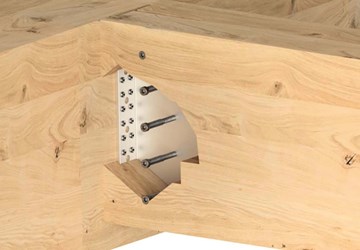