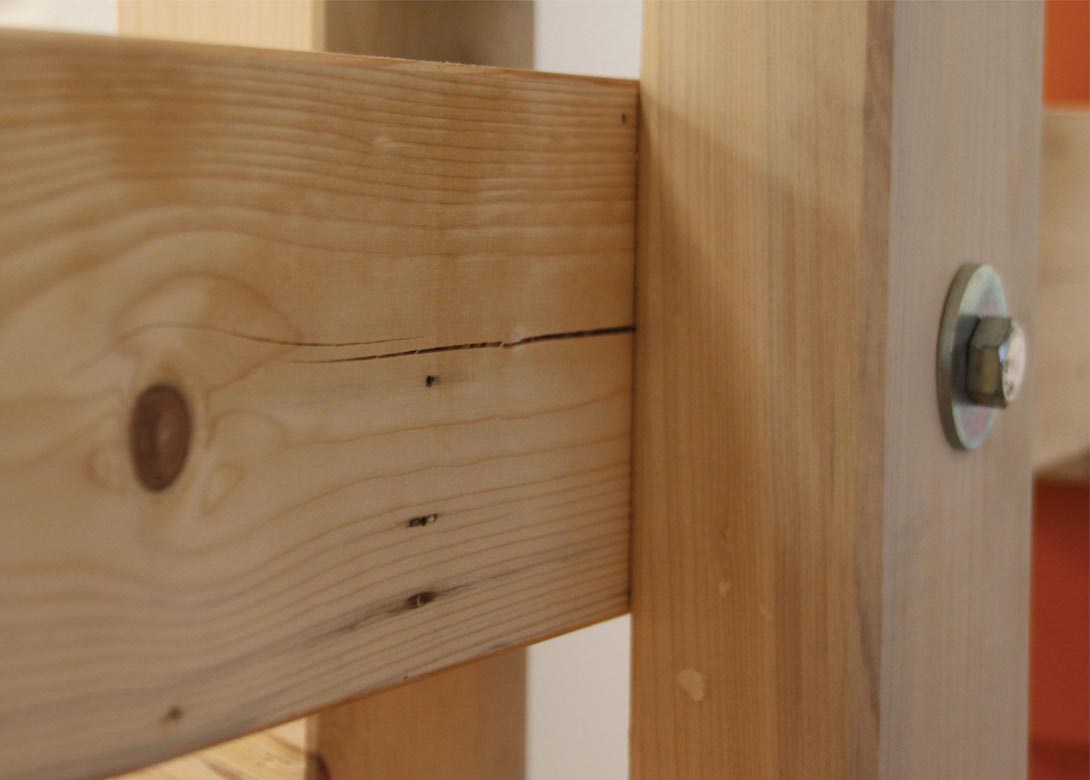 Supporting timber structures, whether in renovation or new construction, often need to be strengthened by means of transverse reinforcement. Joints between main and auxiliary beams, supporting timbers or cross connections (including steel components), suspended elements, as well as the strengthening of notches and apertures are typical applications. The implementation of transverse reinforcement can be achieved easily and economically by using double-threaded screws.
Due to its grain structure, wood can accept tensile loads acting in the direction of the wood fibres very effectively, but is not able to cope with such large forces when they act transverse to the grain. If the transverse tensile forces are too high, cracks can develop in the wood, and in turn weaken the construction. To avoid this, and to accept and distribute high-tensile loads sufficiently, the locations concerned need reinforcement. A variety of aids and procedures are available for this: Mounting of nailed steel plates; reinforcement using metric threaded rods; or profiled bars bonded with synthetic resin. Self-tapping double-threaded screws have been found to be an easy to install alternative.
Transverse reinforcement using double-threaded screws has proven particularly effective in renovation, when buildings are subject to a change of use, leading to a modification of the supporting structure and displacement of the loading. The merging of rooms and the associated removal of load-bearing walls, or the subsequent installation of suspended structures are examples. Structural measures outside the building – gable-end balconies that are suspended from projecting purlins for instance – can entail changes to the load, and require additional reinforcement. If space consuming supports are avoided, or if the dimensions of the beams can no longer be chosen freely, the ability of double-threaded screws to transfer load can provide the necessary reinforcement. The same applies when structures or intersections that have already been implemented to a high visual quality need to be upgraded, but should if possible remain unchanged, or when the space to assemble reinforcement is very limited.
In these cases double-threaded screws offer an effective method of upgrading, since they make special components such as steel plates or washers unnecessary.
Procedure – dimensioning
To be able to gain the most of the transverse reinforcement in terms of load capacity, input of time and material, the planning and evaluation of the site has to be done carefully. Screw manufacturers offer easy to use dimensioning programs for this purpose, which provide load verification according to DIN EN 1995-1-1 and assembly diagrams in just a few steps. The user enters values for the geometry of the construction first as these are necessary parameters for the transverse reinforcement. This comprises information on the height and width of the supporting beams that need reinforcement, their arrangement, as well as the type and quality of the materials of all components. In the next step the existing connection of the side lashes to the beams (nails, bolts), and the number and arrangement of the connecting aids are entered. Then the calculation program requires the values of the loads, as well as the duration for which they act on the supporting structure. A selection whether the beam is affected on one or both sides is possible too. On the basis of the system and loading values, the dimensioning programs perform a load simulation, and determine whether there will be an overload, or whether the construction is already sufficient for the forces that will be applied. Three-dimensional and rotating design graphs provide a visual display of the assembled situation, conveying a realistic impression. Through this dimensioning, the user receives an optimised, proven solution that takes into account the number, size and arrangement of the reinforcing double-threaded screws. 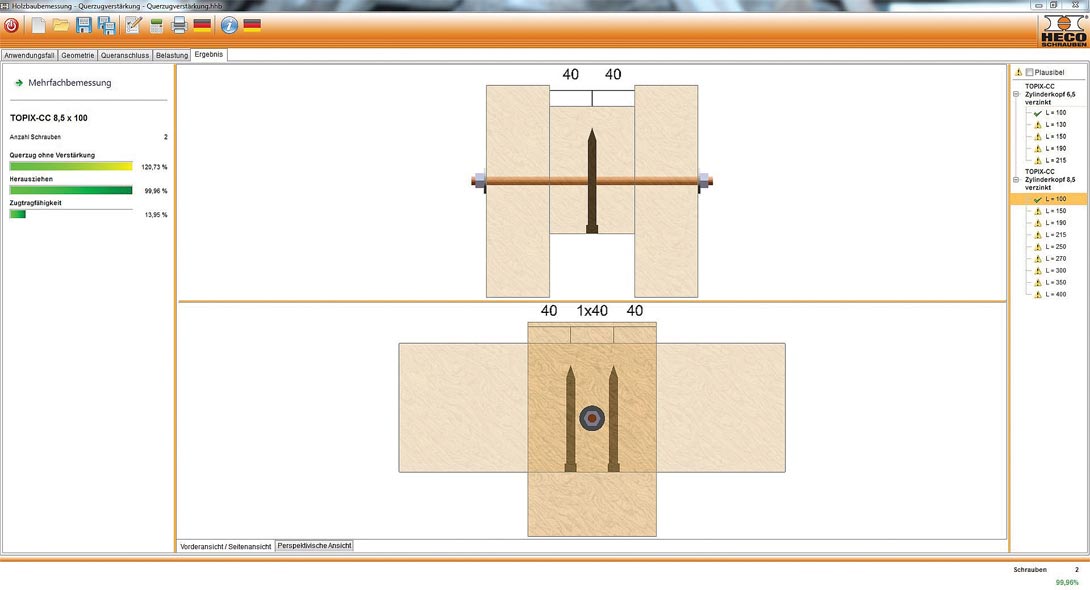 In the screen of the results, the user finds the program’s recommendations regarding the number, dimensions and arrangement of the reinforcing double-threaded screws

Procedure – assembly
Following the dimensioning, the arrangement of the double-threaded screws is marked on the relevant wooden construction according to the geometry that has been determined. The dimensioning program determines the axial spacing and edge clearances of the screws. The example below recommends two of the HECO-TOPIX-CC double threaded screws sized 8.5mm x 100mm, spaced 40mm apart and 40mm from the edge of the beam. The screws are inserted perpendicularly to the wood grain and must be screwed in flush with the surface. The screw couples the part of the cross section, which is loaded by the transverse force to the unloaded part of the cross section inside the wood by means of its full thread, and transfers the active forces through its profile along the axis. If cracks are already present, they can be closed up seamlessly, directly where they arise, due to the contraction effect of double-threaded screws. The transverse strength of the wood is restored or even increased. 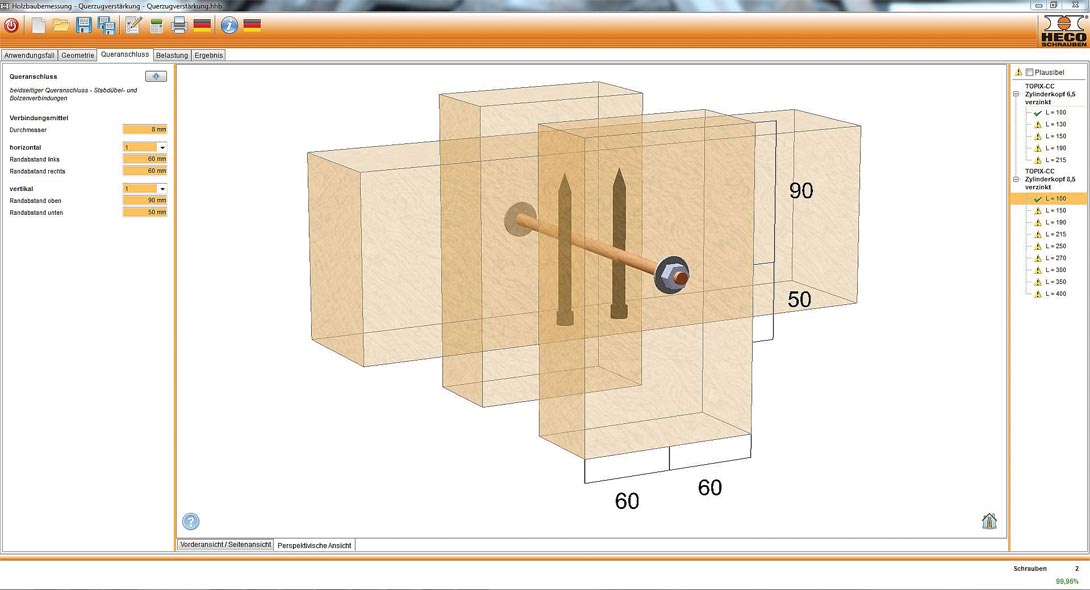 Dimensioning programs, such as HCS 3.0 from HECO, enable designers and carpenters to calculate the transverse reinforcements using the HECO-TOPIX-CC double-threaded screw precisely in just a few steps. The system view displays the existing assembly based on the values that have been entered.

Fast and effective reinforcement from inside
Transverse reinforcement is an economical, material saving alternative for reinforcing existing intersections or beam connections, without significant changes to their appearance. The use of double-threaded screws offers the advantage that neither pre-drilling nor bonding is needed, and the components can be subjected to load immediately. The reinforcement can be carried out subsequently, without great additional expense and without causing problems to subsequent trades. In new constructions, they can be used as a preventive measure before installation and can permit slender, even filigree cross sections due to the large loads that the double-threaded screws can distribute. Thus, suspended parts of the building with large tensile loads do not result in excessively large intersections.
The transverse reinforcement can be dimensioned quickly, and can be installed without any additional assembly aids. It is not necessary to measure the existing beams exactly, or to determine the precise dimensions of bolts or plates. It is sufficient to screw and countersink the double-threaded screws into the wood according to the results of the dimensioning process.
www.heco-schrauben.com
Save and share
More
Construction Fixings 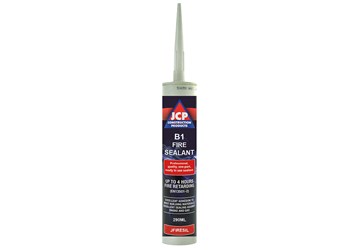 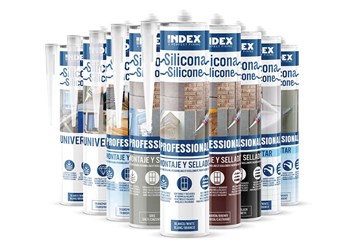